I’m working part-time now for my stepdad at his sign shop, where it’s usually really cold and I tend to get kind of dirty, so lately on work days my look has been less about style and more about being comfortable and wearing things that I don’t have to be delicate with.  So these days it’s a lot of leggings, Frye boots, and sweaters layered over little boys’ Hanes undershirts.  Today’s outfit was another variation on that theme: 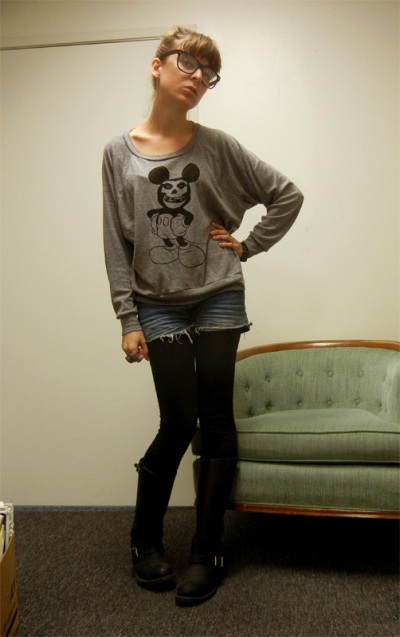 Yeah…I barely even put on makeup anymore right now.  I still want to wear stuff that appeals to me, though, so I’ve been looking for sweatshirts and sweaters that are easy to throw on in the morning.  When I found this raglan by Hips & Hair over the weekend at Unique L.A., I kind of couldn’t resist it.  It’s clearly me. 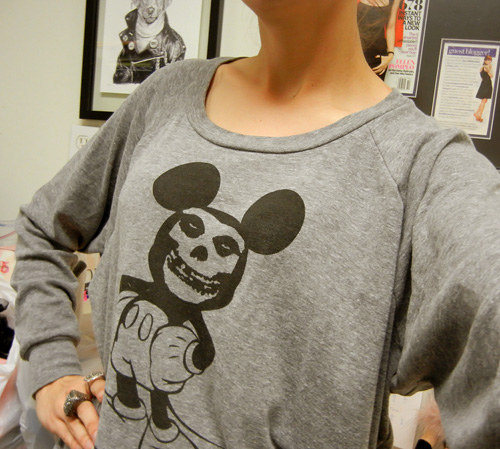 I really love the print and it’s super soft.  I got one two sizes too big because I like to wear things loose.  I always like to support small indie designers and I had never heard of these guys before so I was stoked to come across them — they have a lot of rad stuff.  I’m feeling this “CVLT Venice” tank too.

Between working at the sign shop in the mornings and sewing and making jewelry (I have some really cute new stuff going up soon!), my hands are just a mess these days.  I’m trying to tell myself that if my nails look nice it must mean I’m not working hard enough, but that OPI “Gettin Miss Piggy With It” red glitter nail polish in my bathroom cabinet is calling my name.

loving and losing and learning

In the fall in San Francisco I was in the bathroom at Zeitgeist and someone had scrawled graffiti in red lipstick on the back of the stall door.  It was big and messy and earnest and it said “MY ♥ IS BROKEN.”

I thought, Me too, girl.  Not broken like brokenhearted — I was in love then — but broken, like, it just don’t work right.

I confess, I have a history of being a serial monogamist.  Since I dove head-first into the dating pool at the tail end of my teens, my longest solo stretch has lasted only about four months.  And even when I’m actively single (meaning actually going out and attempting to connect with other human life forms, as opposed to inactively single, which involves sitting on the couch in my underwear watching “Snapped” marathons on Oxygen), history proves that I tend to spend a lot of that “alone” time hung up on some unavailable asshole or another who gives me enough attention to keep me interested until I find someone else who is actually willing to date me.  Then, inevitably — sometimes after a couple of months, sometimes after a couple of years — I realize I’m in a relationship with someone who, while possibly wonderful, is also probably wrong for me.  And so the whole process begins again.

It was the same song this year.  I found someone in January that I came to love a lot.  I still love him.  But the longer I stayed with him the more I realized how incapable I was of being in a successful relationship.  I hadn’t given myself enough time to figure myself out before falling back into the comfort of being part of a couple.  Maybe I had never given myself enough time.  I thought for a while I could somehow both find myself and figure out what it is I wanted and still stay with this kind, sweet person whom I feel is so deserving of good love.  Ultimately I had to come to terms with the fact that I was wrong.  My search for myself made me neglectful of my relationship to the point where it was unfair to remain.

It hurt.  It still hurts.  It’s really hard to leave someone you love when things just aren’t working and you can’t put your finger on quite why.  But I’m trying to be an adult and being an adult, I guess, means facing up to your issues and dealing with them instead of repeating the same old patterns.  So that’s what I’m trying to do.

As I’ve grown older I’ve really come to terms with the extent to which I thrive on male attention.  It’s not a quality I find particularly attractive in myself.  I like to think of myself as a strong, independent person, yet I find that I seem to thrive in a relationship, at least at first.  I like having a partner, someone that’s always in my corner, someone that I can call and complain to about the most inane shit and someone that will hold me when I’m feeling lonely, which is often.

But, you know, who doesn’t like that?  Just because I like that doesn’t mean it’s what I need right now.  My girlfriends tell me that feeling of emptiness passes, that you get used to being by yourself.  I have to admit that I have never been alone long enough to get used to it.  I’ve never not had that void in my stomach when I’ve been by myself.  I’ve gotten pretty good over the years at filling it with meaningless pseudorelationships and half-hearted connections, but the older I get the more I realize that filling a hole with crap is not the same as repairing one.

So I’m attempting to avoid falling into the same pattern.  And it’s not easy.  When I’m alone by myself lately (which is often, now being single and still with that pesky issue of not really having much of a job or social life) I find myself doing weird things like standing in one place in the kitchen staring out the window and then looking at the clock and realizing I’ve been doing that for twenty minutes.  Or going on endless slow walks around the same block that I’m sure make me look slightly crazy to my neighbors.  Or reading sample after self-help book sample on my Kindle while rolling my eyes and feeling vaguely patronized.  Or playing the same song twenty times on my guitar until all the people who live in a 100-yard radius of me wish I’d never learned “Rainbow Connection.”  It turns out — for me, at least — that being freshly single is a lot like being freshly unemployed.  There’s the same overwhelming combined feeling of ennui and uselessness.  The difference is that at least when that feeling comes from being unemployed you can blame some other bastard, whereas when you’re single by your own fault, the only bastard is you.

But just like being unemployed, I think there’s a hump here that is possible to get over.  I’m just trying to figure out exactly how to pull it off.  I know it involves keeping busy and developing new hobbies and making a lot of time for myself and it probably doesn’t involve drinking a lot during the daytime.  So now, as I seem to be wont to do whenever I’m faced with any kind of internal problem, I’m turning to you, my infallible readers, because you’re always full of good ideas and great advice.

What do I do?  What do I read?  Where do I go?  How do I figure this all out?  I want to have a successful relationship someday.  I really do.  The problem is getting from Point A to Point B in one solid piece.